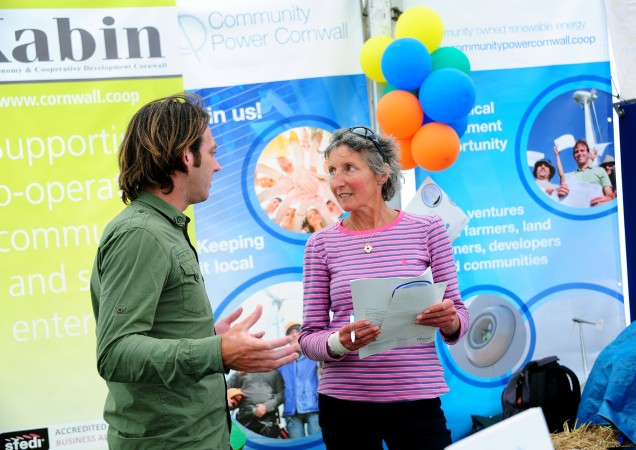 Cornish residents have the opportunity to invest in and benefit from local community owned renewable energy generation as Community Power Cornwall has launched its second share issue.

The pioneering co-operative venture is offering the public community shares worth £735,000 over the next three months.  Its first share issue three years ago attracted just over 100 members and raised £80,000.  Since then Community Power Cornwall has installed two 80 KW wind turbines at Gorran Highlanes and a 10KW wind turbine at BF Adventure, Halvasso, meaning that the purchase of these community shares will be funding both new installations and installations that are already operational.

Shares in the co-operative went on sale on at Community Power Cornwall’s stand at the Royal Show on 5th June for £1 per share with a minimum investment of £50 and a maximum of £100,000.  The second share offer will close on 14th September.

The co-operative is taking advantage of the financial incentives offered by the Feed-in Tariff to meet its objectives and while it does expect to pay shareholders up to 6% interest on their shares, earnings made through the venture will also be allocated to re-investment in further local renewable generation capacity, helping other community groups with their own projects and community grants.

Community Power Cornwall evolved through community demand for ownership and integration of renewable energy technologies into everyday lives and settings.  The co-operative’s development has been supported through a partnership between Cornwall’s sustainable energy charity Community Energy Plus and the Cornwall-based co-operative development body, Kabin.

Neil Farrington, Technical Director of Community Power Cornwall added, “It is a really exciting time right now for community owned energy. This spring the government published its community energy strategy signalling a clear commitment to this work. For Community Power Cornwall it’s great to see the income being generated from our first site allowing us to bring more renewables into community ownership both directly through CPC and through other community energy co-ops that CPC has been working alongside. Each installation that we bring into community ownership represents an income stream for at least 20 years, which is diverted to serve the community rather than enriching distant private shareholders and leaving Cornwall.”

Paul Martin, Executive Director of Community Power Cornwall said, “Our co-operative exists to serve the community by keeping more of the benefits derived from our natural resources in Cornwall and to do that we require capital. We’d rather pay interest to ordinary members than pay interest on loans. Therefore we want to raise community shares to both pay off the loans used to install our existing turbines and to reduce the borrowing needed to install new turbines and new roof mounted solar panels. Every pound raised from members in Cornwall is a pound less borrowed.”