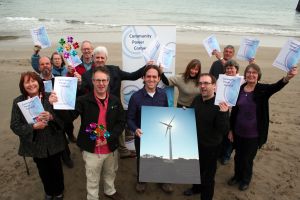 The community co-operative, which is the first of its kind in Cornwall, has already secured planning permissionto site two Endurance E-3120 50KW wind turbines on land at Tregerrick farm, Gorran Highlanes.Community Power Cornwall’s first wind turbines are expected to be installed later this spring.

Planning applications have also been submitted for single 50KW wind turbines on land at the BF Adventure site at Halvasso near Penryn and RSPCA Cornwall’s Rescue Centre at Higher Quoit near St Columb. Community Power Cornwall’s initial share offer aims to secure funding for three wind turbines, with funding for additional developments to be secured from future share issues and other sources.

Community Power Cornwall’s first three wind turbines will generate up to 720,000 KWh of clean green electricity every year, which is enough to power 180 homes and will displace over 377 tons of Carbon Dioxide (CO2) a year from fossil fueled power generation.The emissions saved in one year alone would fill 2.3 Royal Albert Halls.

Shares in the co-operative went on sale on 12th March for £1 per share with a minimum investment of £50 and a maximum of £20,000. The initial share offer will close on 12th June.

The co-operative will take advantage of the financial incentives offered by the Feed-in Tariff to meet its objectives and while it does expect to pay shareholders interest on their shares, surpluses made through the venture will also be allocated to re-investment in further local renewable generation capacity and community grants.

Community Power Cornwall is working with Cornish communities to help them understand their energy needs and to enable residents to influence key decisions on technology choices and scheme scale.Host communities will also benefit from peer development programmes to transfer skills to participants and build capacity for communities to independently develop their own renewable energy and low carbon schemes.

Community Power Cornwall has evolved through community demand for ownership and integration of renewable energy technologies into everyday lives and settings.The co-operative’s development has been supported through a partnership between Cornwall’s sustainable energy charity Community Energy Plus and the Cornwall-based co-operative development body, Kabin.

Neil Farrington, Co-Director of Community Power Cornwall said: “Public awareness of the issues of climate change and energy security are at an all-time high and the technology, government policy and financial incentives are now in place to make our transition to a renewable energy future a reality.As these factors converge, Community Power Cornwall seeks to ensure that local communities are at the forefront of the clean green energy revolution, complementing developer-led schemes which are primarily financially motivated.We’re putting the interests of the community at the heart of our plans and the common ownership model we’ve created will contribute to a diverse, sustainable and secure energy supply infrastructure, under community control and for community benefit.”

Paul Martin, Co-Director of Community Power Cornwall, added: “The introduction of Feed-in Tariffs last year provided a boost to the renewable energy sector but there are numerous barriers preventing communities from developing and delivering their own projects.Community Power Cornwall removes the barriers while ensuring that the financial, social and environmental benefits extend far beyond shareholders’ initial investments. After three years in development, the launch of our first share issue is make or break time to ensure that communities take an active role in Cornwall’s renewable energy future and prevent domination in the sector by commercial developers.”

Community Power Cornwall has been working with Transition St. Goran for two years to develop the wind energy scheme which will become the first community-owned project to be brought to fruition.The share issue was launched at an event at Gorran Haven Village Hall on Saturday 12th March.

Ella Westland, who heads the Community Energy Group of Transition St. Goran, said: “I’m proud that Gorran is leading the way in this exciting co-operative venture. Cornwall’s resources have traditionally been exploited without the benefits being retained in the county, but our community-owned wind turbines will bring profits back to Gorran and to Cornwall. I look forward to using our experience to inspire and support similar projects in other communities.”

Cllr Julian German, Cornwall Council’s cabinet member for Climate Change welcomed the development of community-owned renewable energy projects in Cornwall, he said: “Cornwall is at the forefront of the UK’s transition to a low carbon economy and it’s great to see communities taking an active role in developing their own renewable energy schemes and making a contribution to Cornwall’s ambitious renewable energy targets.”